Clipdat Posts: 11,766
August 2018 edited August 2018 in 2 Channel Audio
I purchased five of these 1.75m Shunyata Venom 14 power cords several months ago and I've been slowly introducing them into my system.

At $95 each, this is Shunyata's least expensive power cord in their lineup. Presumably aimed at the entry level buyer who is ready to try their very first aftermarket power cord like me!

Visually, these look like most standard power cords with molded plastic connectors that you've seen, albeit with a few unique differences. Most notably, the visible twist/spiral that the conductors have can be seen through the insulation. From a specifications standpoint, this power cord seems to be mostly relying on higher quality materials for it's improvement over standard cords:

Build quality/appearance seems relatively nice, but I found it slightly odd that only 3 out of the 5 cables I purchased had the inner conductors' twist visible. The other two seemed to have a thicker insulation or not as dramatic of an internal twist. The retailer I purchased them from informed me that they were all from the same batch that was sent to them.

I reached out to Shunyata for clarification on this and here is their reply: "I just discussed this with productions and figured out the following. All of these Venom 14 models feature the high twist conductors but some have thicker insulation then others which accounts for the visibility differences."

Slightly concerned at this level of QC and production tolerances for a $95 cable, I replied: "I just wanted to ensure that the internal wiring and twist pattern was the same as the other cables. I figured if the twist wasn't the same that it could then affect the inductance and capacitance of the cable."

And then Shunyata's final response: "Yes, you are correct. I confirmed with productions that these are all built identically except some have thicker insulation then others. Sorry for the confusion surrounding these cables but rest assured, they are all built the same internally and should perform identically." 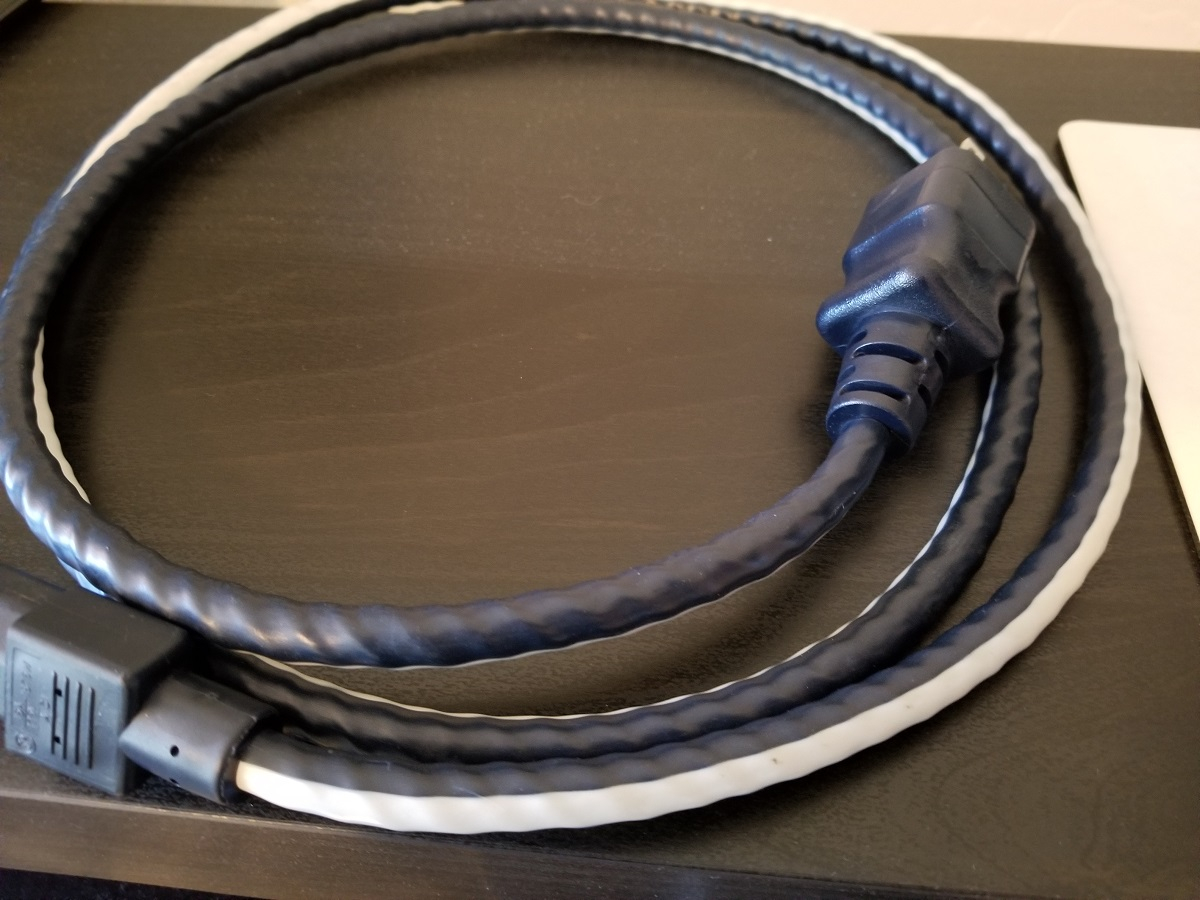 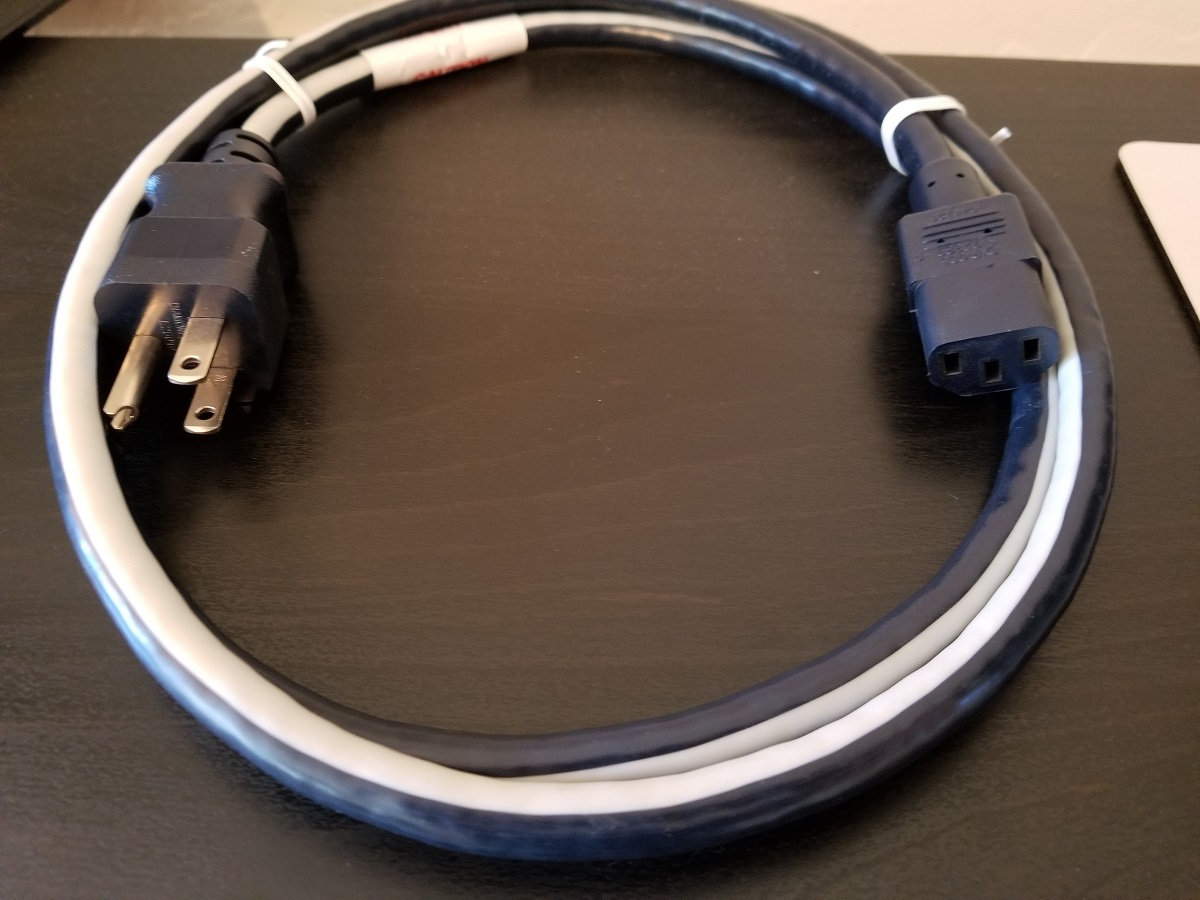 Another interesting thing that I noticed when I was preparing to write this review, is that 3 of the cables have their three prongs exiting the connector at an angle, one at a slight angle, and the last mostly exiting straight.

I've taken some photos to illustrate what I mean. 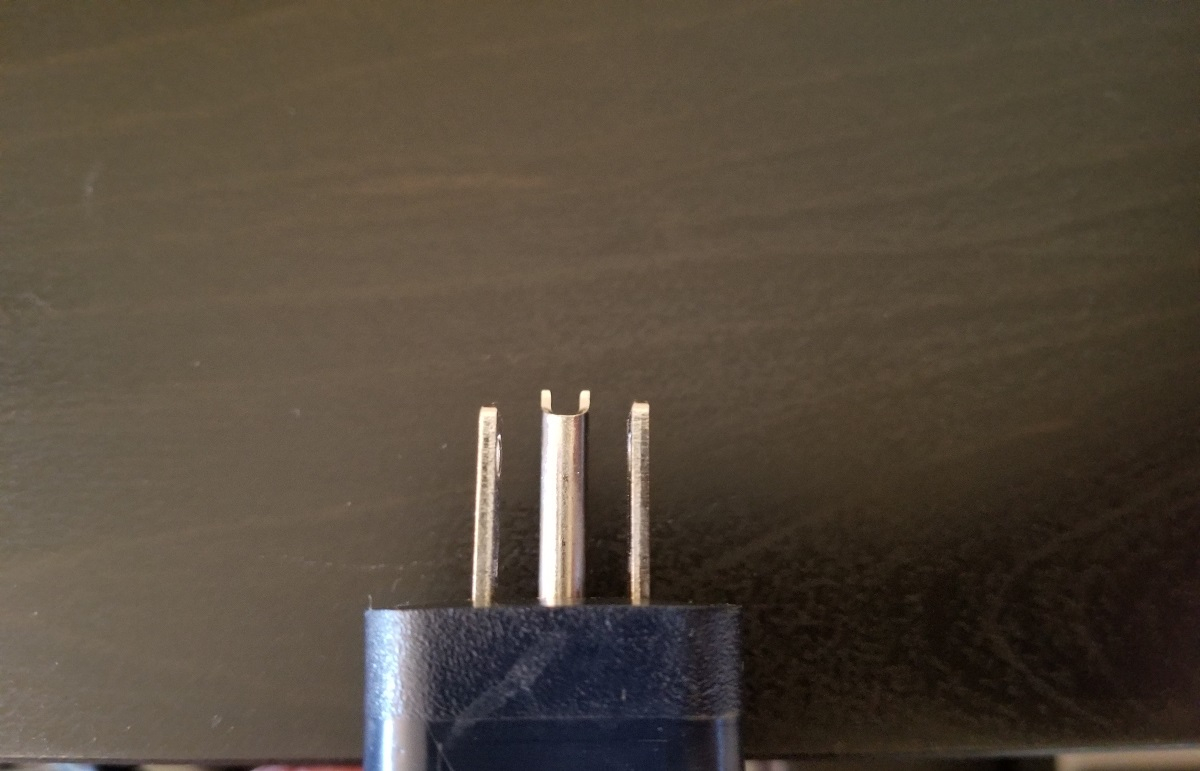 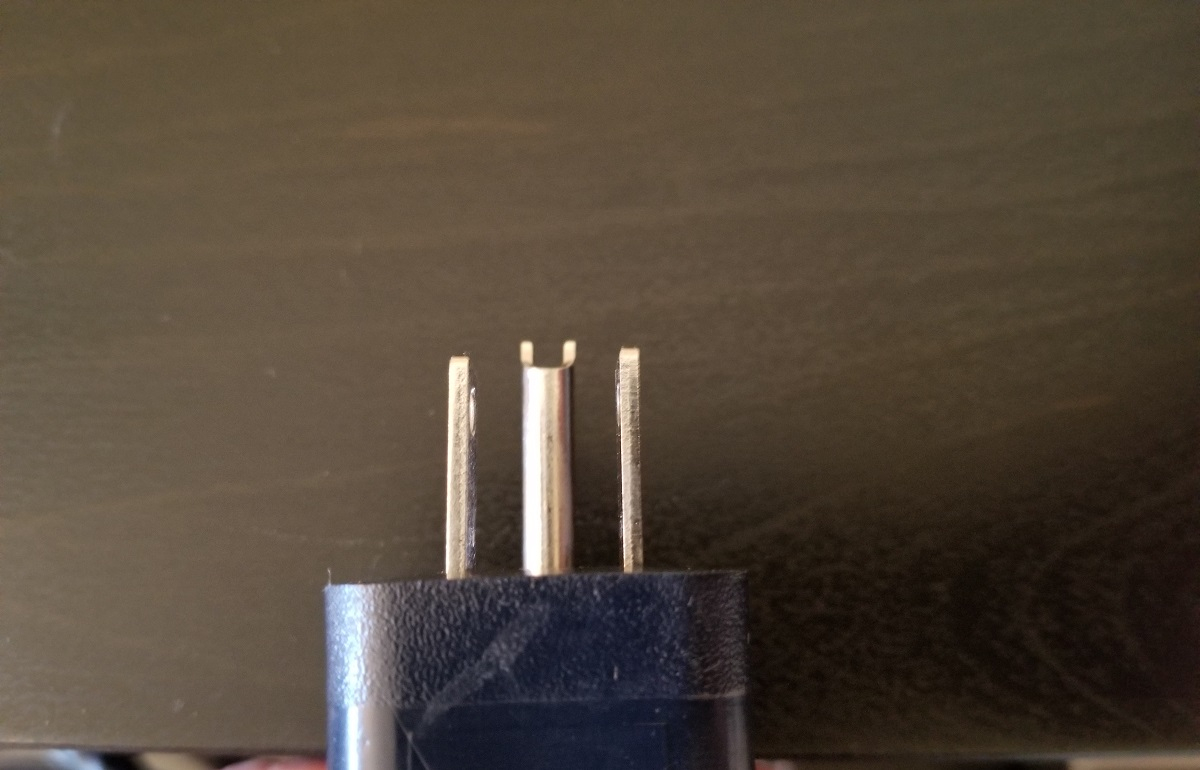 Now, in this photo above, I'm holding the connector angled, so that the prongs are exiting at a straight "90 degree" angle. You can see the degree that I've had to adjust the angle, in order to get the prongs to exit straight.

It can be further illustrated with this straight line, and then comparing it to the line on the molding of the connector: 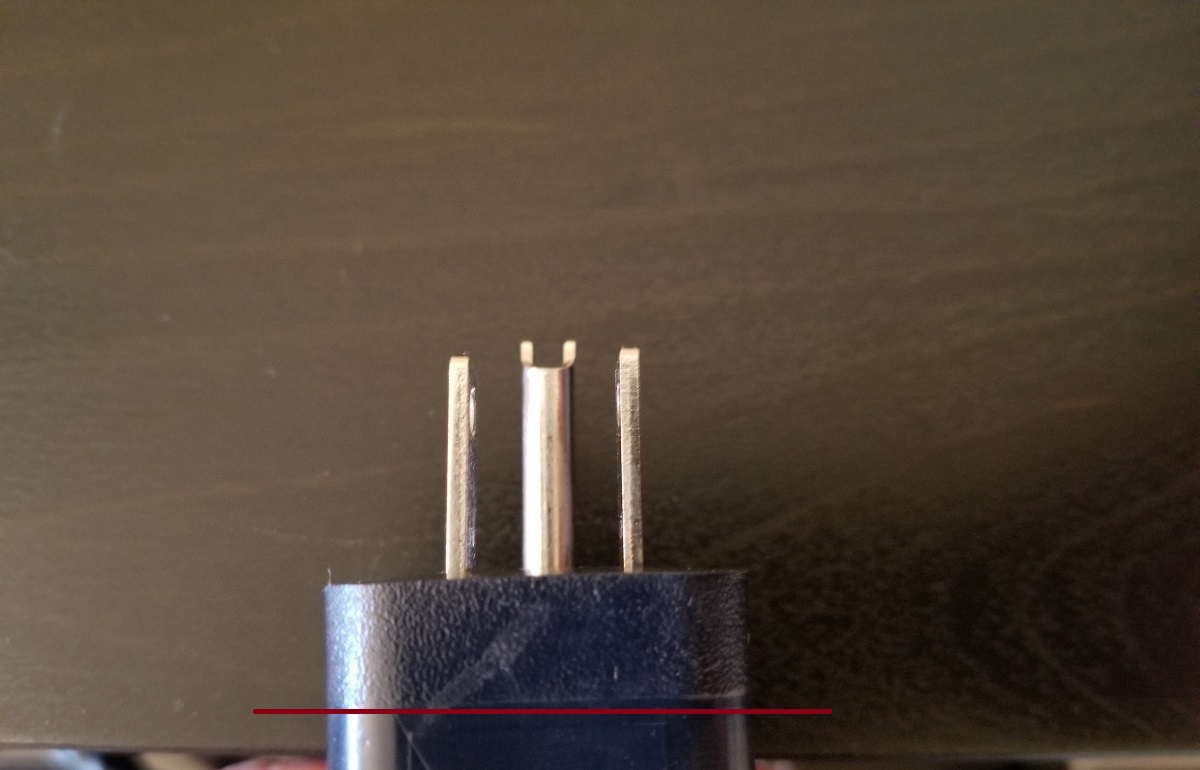 So, again, a little disappointed with the fit and finish for a $95 cable that seems to have production tolerances that are inferior to the throw away black cords included with new equipment.

Obviously I don't believe this will present a real world issue in terms of the cable's performance. The only thing is that the connector wouldn't sit completely flush on the left hand side when the cable is fully inserted into the receptacle. Instead, there would be a few mm of a gap there.

Moving on to the performance/sound of the cable.

I will say that when I purchased these, I told my sales rep that I was skeptical of these making any sort of difference. I think I actually guffawed and said something like "There is simply NO WAY that these will make a difference". He remained calm and said "Just try them out when they arrive and get back to me."

The first cable I swapped was on my Marantz CD6004. Almost immediately (1-3 tracks), I noticed a positive improvement in the stereo imaging sensation. The image and sweet spot was more apparent, I could move horizontally in and out of it and feel it shifting around my ears. Other elements of the player's already excellent performance remained the same. However, even if it only improved the imaging and nothing else, I'd consider that worthwhile as it makes the listening experience a lot more pleasurable, in my opinion.

I also tried the Venom cord on three different DACs. On 2 out of the 3, I noticed that same obvious improvement in stereo imaging. The third DAC didn't seem to benefit as much from it, no obvious differences.

Yesterday, I put the second Shunyata cord into my system on my Schiit Saga preamp. Prior to this, I'd been using it with the stock cord for over 6 months. Even though my system was cold, I almost immediately (first 30-60 seconds of a song) noticed an increase in stereo imaging performance. It was less dramatic than with the CD player, but still noticeable.

I let the system play for an hour and then came back to it to do some further listening. When I sat down and listened for a while, it was obvious that the performance of the preamp had increased. I was hearing an improvement in the decay of the music. I guess this means that more subtleties in the recording were reaching me now. I also noticed that when listening through my CD6004, the highs (cymbals, high hats, etc) got crisper and a little brighter. I don't consider this a bad thing as my 703s tend to have a laid back presentation. I'm not sure if the cable itself is contributing to this additional brightness/crispness, or if there's now simply more musical information in the upper spectrum that's reaching the speakers. Overall, I'm happy with the performance enhancement that it's bringing to the preamp.

After listening to my system again today for roughly six hours, I noticed that the preamp now does not run as warm. I was pretty accustomed to it's operating temp, and got used to how it would feel when I put my hand on the left side where the Schiit logo is. Today and yesterday when I would feel to see how warm it was running, it was noticeably cooler, even though the ambient temperature in the room was the same. Anyone have a scientific explanation for why this might occur?

The next component I'll swap cords on will be my Dayens Ampino monoblock amplifiers later this week, followed lastly by my PS Audio Dectet power conditioner. I'll report back and reflect on any changes I notice.