Playing around with Amps

mantis Posts: 16,226
February 9 edited February 9 in Electronics
Hello all,
As some of you may know, I fell on December 14th and dislocated my knee, tore the Meniscus and relocated the knee joint all in one fall. I have been out of work since and going back February 16.

So with all my free time, knee feeling about 75% better I decided to fool around with a few of the amps I have laying around. I have so many of them just sitting on my storage racks in my basement and I'm running my entire system off my Sony STRA5000es internal amps.

I first connected my Parasound HCA1206 THX 6 channel amp. It's old but solid. I used 5 of the channels to power the floor level channels of my 5.2.2 Atmos system and allowed the Internal Receivers power to power the Atmos channels. I'm gonna add 2 more Atmos speakers once I'm all healed up, I've been wanting to do it for awhile and since I have been home, I really wanted to but crawling around in my Attic and then standing on a 10 foot ladder to install the speakers in my 14 for ceilings with a bad knee I felt was a bad idea.

It's powerful clean and dynamic. Removing the load off the receiver and allowing an external amp do the heavy lifting always free's up Dynamic range under loud conditions. During normal volumes it's less noticeable as the amp isn't breathing any fire LOL.
I connected it with 5 Audioquest Mackenzie Analog RCA cables from the Pre-outs of the AVR.
One thing about this amp and many old amps is it's not dead quiet when there is no signal. It's like it has to send out just a tad bit of power out to the speakers which the speakers will play what most will call "AMP HISS". If you walk up to any speaker , you can hear it. During playback you can not hear it at all. It's like a Guitar amp just much quieter. 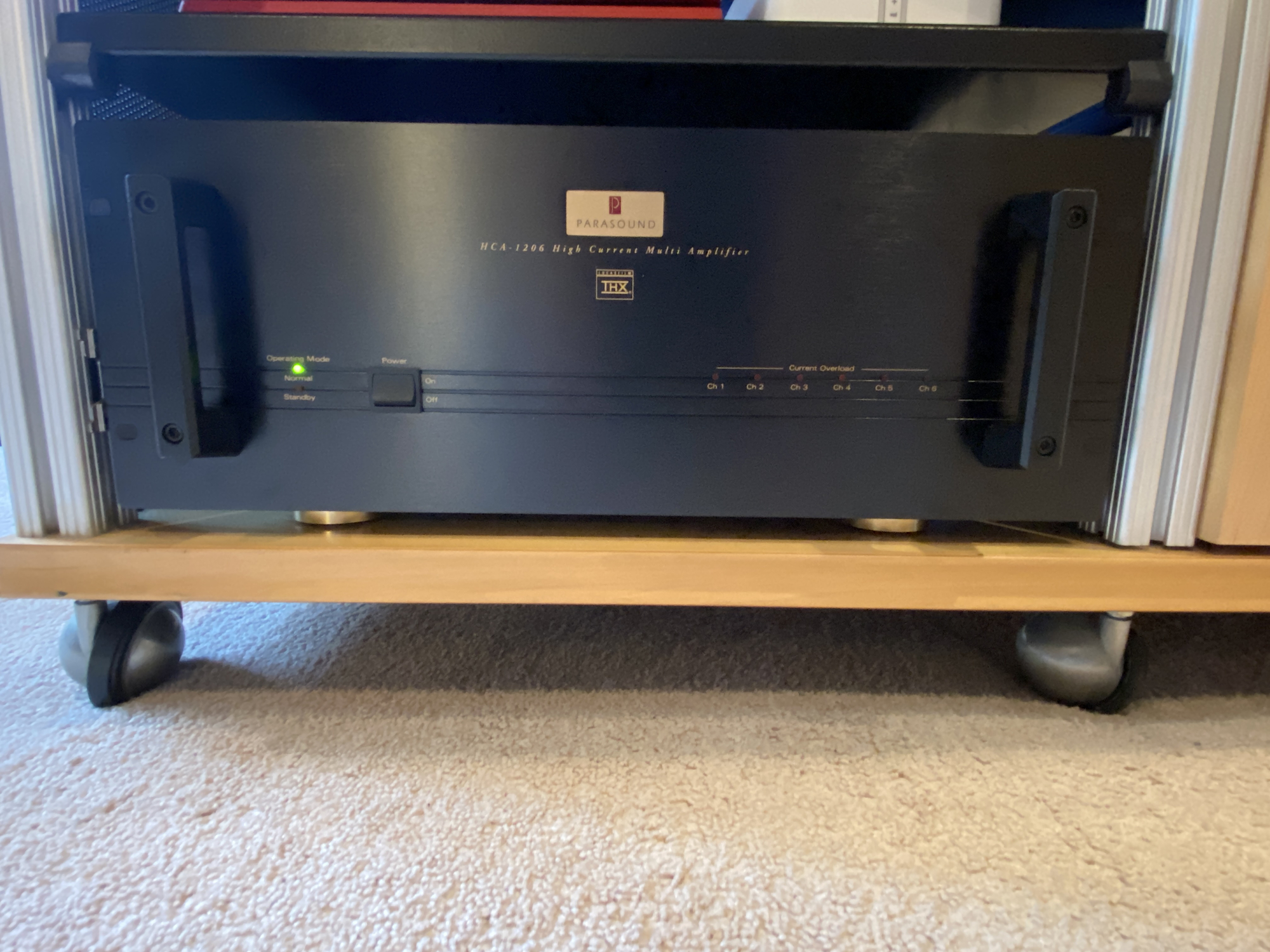 So after fooling around with that for a few weeks I pulled it out and carried it's heavy **** back to storage and grabbed my trusty Niles Si2125 which is just 2 channel as I wanted to see if it's less then as I remember from back in the day. I had this amp for so long, I use to use it for my Outdoor speakers with a Sonos connect I think I have a ZP90 first on it and then upgraded to a Connect. I then replaced that combo with a Sonos Connect Amp and it's been that way for many years. It just sits on the shelf with no one to play with.

So with just a pair of Makenzie to the main channel outs I connected it. One thing about this amp as it's newer then the Parasound , it's dead quiet when there is no signal. What I remember talking to B&K Engineers is a soft muting circuit is responsible for the dead quiet and amps that have a hiss. When there is a muting circuit you can't hear the hiss and when there is a muting circuit there in no hiss. According to them amps that hiss will sound better as there is less in the way of the signal. Purest probably will agree but I'll be damned if I can tell a difference with this Amp and the Parasound running the same speakers with the same wiring same Audioquest power cord etc. I was actually surprised as I remember being a bit of an Elitist and feeling that if it wasn't a Rotel , B&K , Adcom ,Parasound ,Krell etc that you where giving up some quality in your sound by using the Niles amp which where way more affordable then the other brands. But to my surprise this amp sound killer. It's punchy as hell and doesn't give up anything at high volumes. It keeps it's composure way better then I remember.

Years ago this amp was the hot amp for multi channel music when you wanted to put a good pair of bookshelf or floor standing speakers in a room off a Multi Channel system. We had 30 x 12 and 60 x 12 amps that usually ran the house and for that 1 or 2 rooms the SI2125 would go in and power those higher end speakers. Sometimes we used B&K amps when budget allowed but when we needed a more affordable solution, the SI2125 was called upon. I never felt it didn't sound great in all Installs, Actually it always surprised me and for the last week or so now It keeps impressing me with it's output power.

I may just leave it there and allow it to blow the dust off the Cap and get this really nice amp back in play. I like it's sound , I like how stupid custom it is.
So the Parasound amp I had to trigger it off my APC H15 Triggered Power Outlets. A 12v Trigger out of the Sony setup for each input to Trigger out 1 , then connect it to the APCH15 to trigger On and Off the Amp Power Outlets which are High current and can support 15 amps full power.
For the Niles, It has 3 options on it. 1 - a 12v trigger directly to it which is how I do it , 2 Signal sense meaning that like your Subwoofer when signal is present it will automatically turn on and 3- always ON which I find useless but if you like your amp on and warm all the time, go for it. It's like a Tube mentality for Solid State thinking that when the amp is fully warmed up it sounds it's best. That takes seconds to happen or maybe a few minutes at most at low volumes and honestly I never heard a difference after it's been on for awhile so I never just let it suck electricity when not in use. 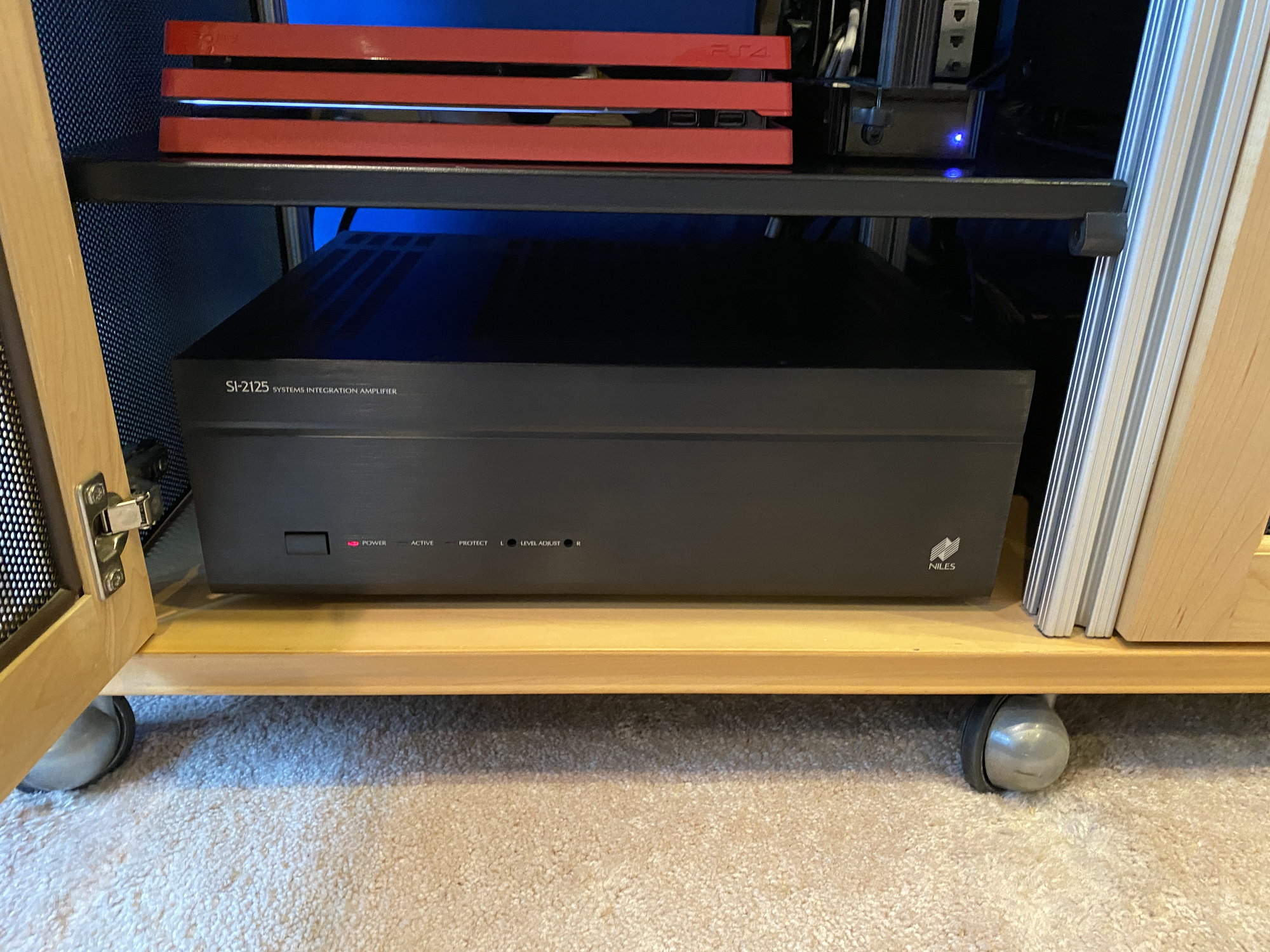 I guess it's better to play with your old toys then to be bored.


Dan
My personal quest is to save to world of bad audio, one thread at a time.
3 · Share on TwitterShare on Facebook