The PCM To DSD Conversion Project 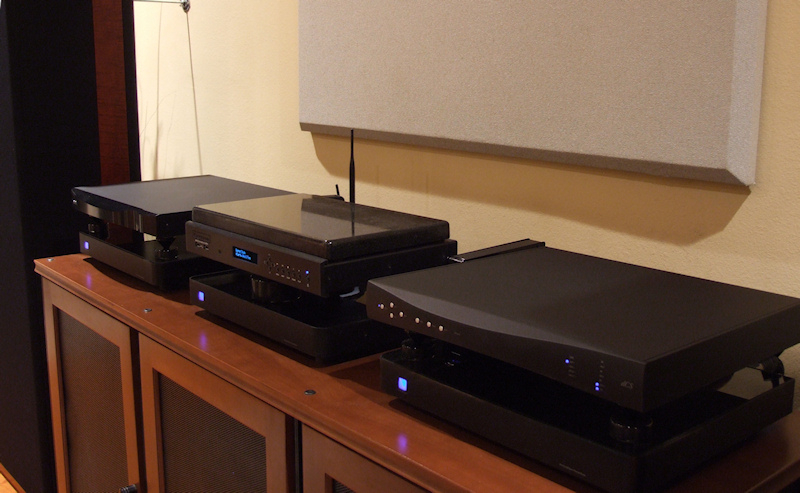 I recently completed a conversion of all PMC FLAC format music files to DSD (direct stream digital) format. DSD is the format used to encode SACD discs. My motivation for this project was not better sound quality, although that was an unexpected benefit. My motivation was convenience.

"Our Phase Locked Loop circuitry has a 3-stage lock which takes a few
seconds longer than simpler designs. This is a factor in the sound
quality, as you need a very narrow bandwidth in order to filter out
jitter. We are considering a final update to the Debussy to add some
higher sample rates, but I don't know if it has sufficient capacity
to reduce the locking time.

Note also that the U-Clock has to lock before the Debussy can start
to lock, so you have 2 delays in your system.

The USB interface is primarily intended for connection to a PC.
Streaming programs such as JRiver have the option to play a few
seconds of carrier after a rate change, to give the DAC time to lock
and unmute. It might be worth asking Bryston if they have the
capacity to add a delay."

My Bryston BDP-2 digital player does not have the capability of adding gaps between songs. The workaround I used was to make silent files of 2 seconds for every sample rate in my music collection. When making playlists, the appropriate "gap file" was inserted where needed. This was cumbersome, but effective. My playlists typically have a mix of FLAC files of different sample rates and DSD. The 2 second length was arrived at by trial and error.

In order to get away from that cumbersome workaround, I began investigating PCM to DSD conversion software. Most such software is aimed at the professional recording studio market. I evaluated three that are aimed at the home user:

The TASCAM converter required a conversion from FLAC to wav prior to converting to DSD. The resulting FLAC files had diminished detail, clarity, and spatial properties. This was also true of the Aul converter, but to a lesser extent. Aul could convert directly from FLAC to DSD. JRiver produced the best sounding conversions, with DSD files that had improved clarity, detail, and spatial rendering than the original FLAC file. I already owned JRiver, therefore no additional investment was required in software. I did invest low 4 figures in new hard drives and hard drive enclosures. JRiver's PCM-to-DSD performance was commendable when compared to a $2,000 professional recording studio package:

"...it would not gain you anything anyway. You would get:
an increase in file size
no increase in quality
a file you cannot edit

VinylStudio's support for DSD is to allow you to record from devices that support it, and, if desired, to convert the resulting file to PCM."

PS Audio, the maker of the NuWave Phono Converter that I used to convert my vinyl records to DSD format, recommended a maximum sample rate of 96kHz, but they included higher PCM and DSD sample rates because they knew there was a demand for it. This quote is from the NuWave manual:

"Our recommended maximum sample rate for all vinyl phono or Analog inputs that do not exceed a usable input bandwidth of 48kHz, is 96kHz. As there is no usable information on a vinyl LP above30kHz, it will always sound preferable to restrict the maximum output sample rate to 96kHz."

At the beginning of my vinyl ripping project, I experimented with 96k, 176.4k, 192k, and DSD64, and I obtained the most natural and detailed sound with the best spatial properties as I went up in sampling rate.

My mixed-sample-rate digital music collection currently took up 62% of a 2 TB hard drive. The all-DSD collection takes u[ of half of a 6 TB hard drive. Average differences in converted file sizes with respect to sample rate were as follows:

When I began research for this project, I was not aware that there was a rancorous "PCM vs. DSD" debate similar to other audiophile/anti-audiophile debates such as "tubes vs. transistors", "sighted vs. blind testing", and "stereo vs. mono".

"So hot it burns Mice!"~DK "Polk SDA-SRSs are hopelessly out of date both sonically and technologically... I see no value whatsoever in older SDA speakers."~Audio Asylum Member "Knowledge, without understanding, is a path to failure."~DK "Those who irrationally rail against something or someone that is no threat to them, actually desire (or desire to be like) the thing or person they are railing against."~DK
Post edited by [Deleted User] on November 2017
1 · Share on TwitterShare on Facebook