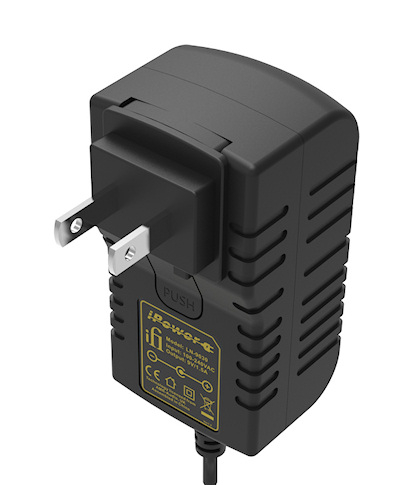 This review is the first addendum to my review of the Bryston BDP-3 digital player:

Switch mode power supply (SMPS) AC-to-DC adapters are known for producing large amounts of electrical noise. This noise is generally of little concern for computer applications. I wondered if a lower noise SMPS adapter designed for computer audio applications would provide better audible performance...and it did.

Noisy SMPS notwithstanding, I was doubtful, and skeptical, that a lower noise power supply would provide any audible benefit due to the extensive electrical noise abatement measures employed in my two channel stereo system. However, prior to this study, I really didn't have a good understanding of just how much noise switch mode power supplies generate. 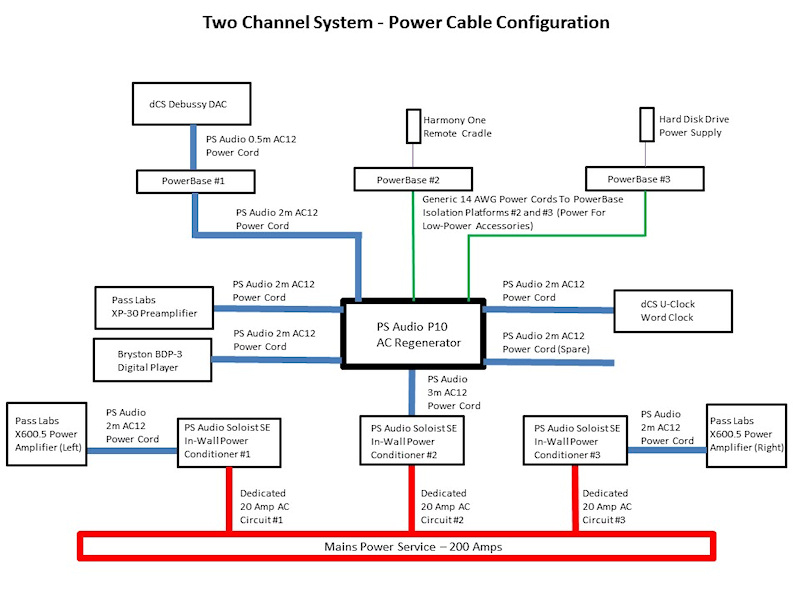 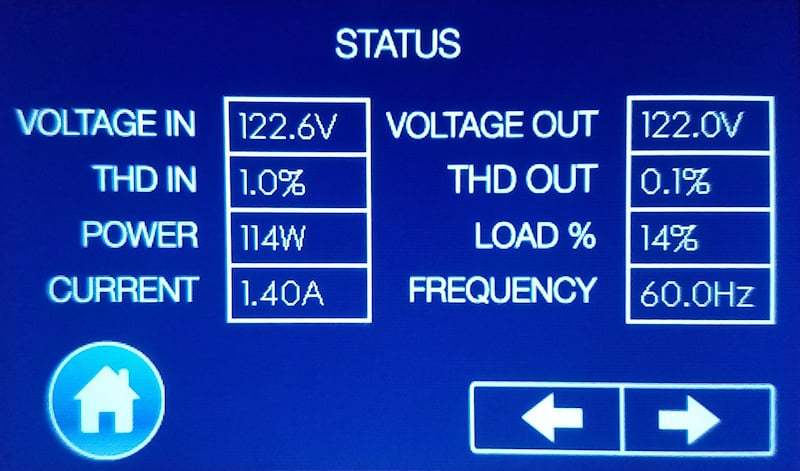 The electric power serving my home is exceptionally clean and stable, with total harmonic distortion in the range of 0.8% to 1.5% and voltage in the range of 121 volts to 123 volts. The AC regenerator feeds significantly cleaner power and constant voltage to the preamplifier, source components, and accessory components. The monoblock power amplifiers draw too much current (nearly 5 amps continuous each, at idle) for the AC regenerator to handle, therefore, the power amplifiers are plugged into the wall. However, each power amplifier has its own dedicated 20 amp AC circuit and the wall outlet of each AC circuit was replaced with a PS Audio in-wall passive power conditioner. Additionally, the two AC circuits for the power amplifiers are on different legs of the electric service. 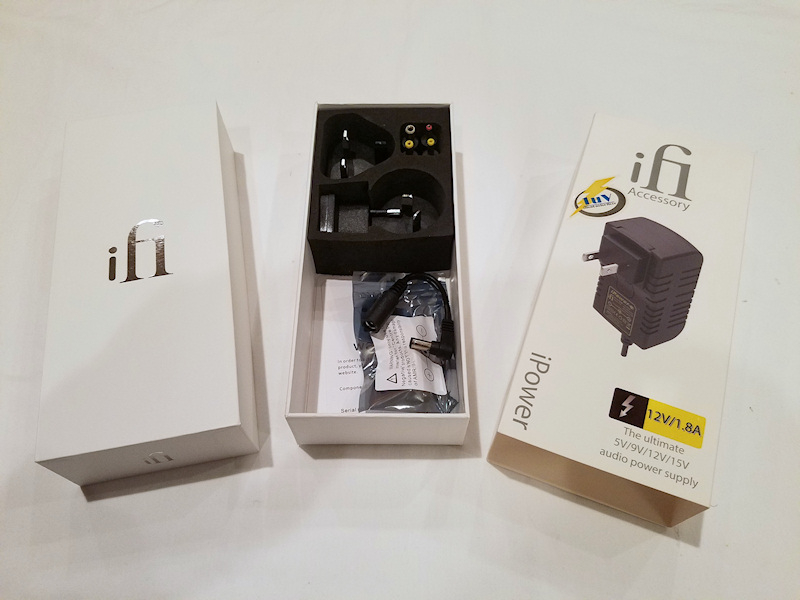 Figure 3. The iPower AC-to-DC adapter is manufactured by iFi audio. It is marketed as an audiophile-standard DC power supply. 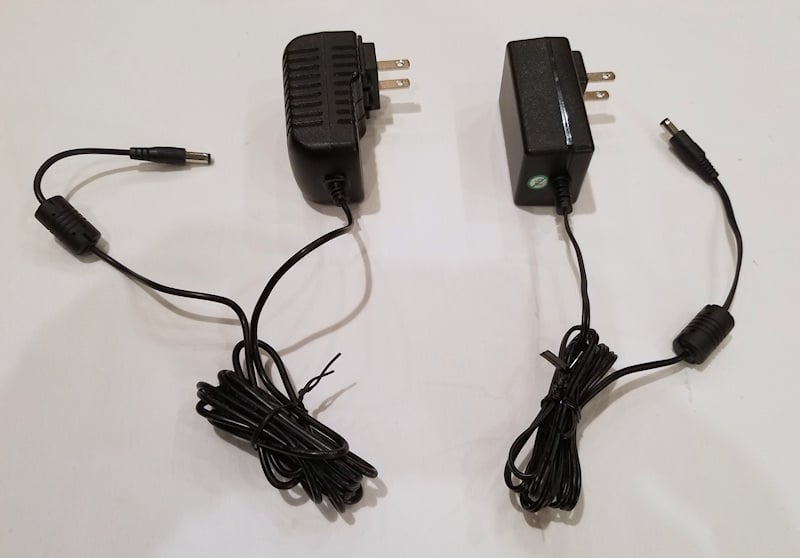 The song used in the BDP-3 review, Jeanette Harris' "Saxy", was again used for the iPower's
listening evaluation. Sound images were mapped and characterized during ten repetitions of the song. 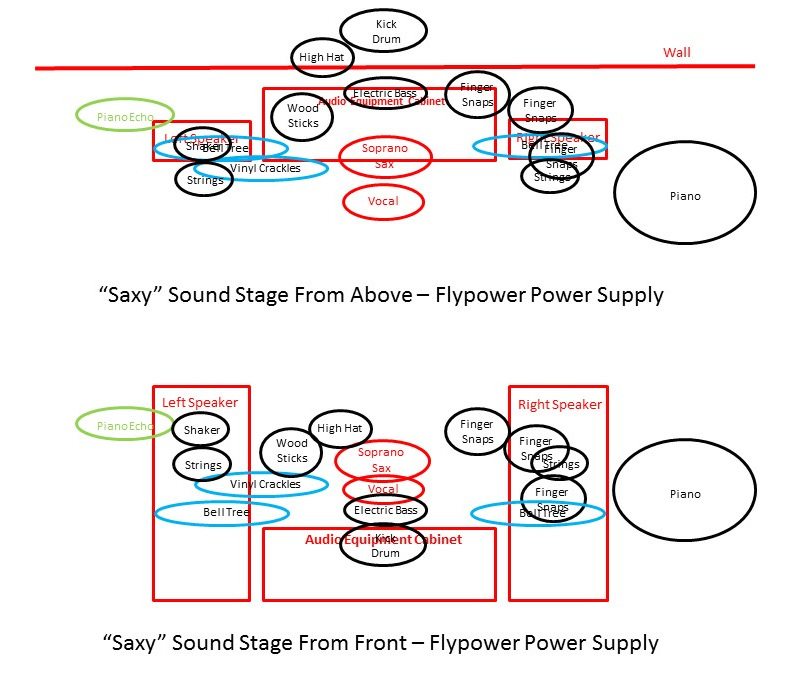 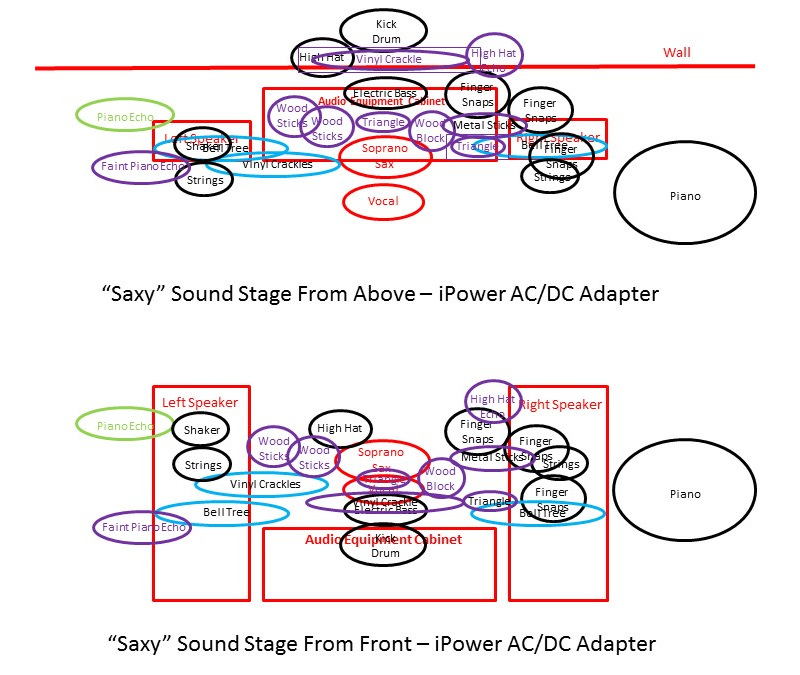 The size and placement of instrumental and vocal images with the iPower AC-to-DC adapter was the same as with the stock AC-to-DC adapter. The clarity and detail of those images, particularly in the bass frequencies, was improved. There were some percussion instruments that were previously masked that were clearly and cleanly presented with the iPower. Those unmasked images are shown in purple in figure 7. Although the sound stage maps in figure 7 look busy and cluttered, the sound was not busy and cluttered since the sounds occurred at different points in time. In particular, some percussion instrument images and ambient sound images, which were previously masked, only occurred infrequently.

Toward the end of the song, the vinyl surface noise sound effect can be heard faintly at the rear center of the sound stage. This sound was previous masked by the synthesized electric bass and synthesized kick drum. The triangle was previously masked by the bell tree, wood sticks. soprano saxophone, and vinyl surface noise sound effect at the front of the sound stage. The wood block was previously masked by finger snaps, electric bass, and kick drum. The metallic sticks were very close to, and previously masked by, the leftmost finger snaps image. The wood sticks image to the left of the soprano saxophone was now rendered as two images, with the stick strikes alternating locations on successive bass beats. New echoes of the high hat and piano were also resolved.

In addition to the above, there was more tongue, throat, and chest articulation and sharper transients in the male vocal, more fluidity in piano notes, and more detail in the reverb around the vocal and soprano saxophone.

"Healing Song" - Gregg Karukas - "Heatwave" album - With the iPower, there was more rumble and growl in electric bass and drums, more reed sound in the tenor saxophone, more "gravel" and overtone texture in the organ notes, more clarity and detail in the piano notes.
"So hot it burns Mice!"~DK "Polk SDA-SRSs are hopelessly out of date both sonically and technologically... I see no value whatsoever in older SDA speakers."~Audio Asylum Member "Knowledge, without understanding, is a path to failure."~DK "Those who irrationally rail against something or someone that is no threat to them, actually desire (or desire to be like) the thing or person they are railing against."~DK
Post edited by DarqueKnight on January 2019
1 · Share on TwitterShare on Facebook