ALL212 Posts: 1,394
January 14 edited January 14 in DIY, Mods & Tweaks
I whined a bit in https://forum.polkaudio.com/discussion/195727/decimal-points-or-i-just-whoopsed#latest about my inability to read. As it turned out I DID order the right part. No matter.

I used Mills resistors except in the 4.7 ohm 15 watt position where I put in a Mundorf M-Resist Supreme at 4.7 ohm 20 watts (one of the more expensive parts in all of this). All resistors are exact size replacements.
ClarityCap 8.2 uf is an exact replacement value but I had to parallel a 3.9 uf on a 20 uf to get close to the 24 uf needed. As it turns out the 3.9's measured right at 4uf so I ended up with 24.3 uf on one crossover and 24.11 uf on the other. I tipped each of the electrolytic capacitors with a .01 film cap from the bottom of the board. These were Dayton Audo Grade PPT's left over from prior projects.
I used Dayton Audio Perfect Layer inductors. .9 mH instead of .87 mH with a slightly higher DCR as its an air core instead of iron core. As an effort to reduce the mH slightly I pulled "exactly" 6' of wire from the coil. No math involved - I just wanted it less than .9 mH.

Total cost was $175 of which $30 was tax/shipping from three different vendors. Parts actual cost about $146. Cost could be reduced if you could find all of these parts in one place but I consider this a fairly inexpensive upgrade for speakers retailing for $750.

Since these are the R200's the crossover has plenty of room but I wanted to use the same crossover board. I also kept the same wiring. Some damping was put on the woofer frame.

Removal of components was nasty especially the resistors. The glue on these R200's is much more aggressive than the glue on the L100's. But everything came off without messing up the board.

Soldering on these boards was adequate but not very professional looking. Solder seemed "blobbed" in on many pads.

Removal of wiring is interesting as locking spade lugs are used. I used an angled needle nose plyers and was able to remove all without incident but just yanking on these will not release them. Grip close to the spade portion of the connector and squeeze hard, pull gently (to harshly) and the spade should let go. I gently recrimped all of the spades before reassembly.

There are two sheets of sound damping material in the cabinet, very similar to the L100 and of the same material.

Tweeter was not removed. It's of the "mess with me and I'll break" installation theory.

Original board - not my pic, stolen. 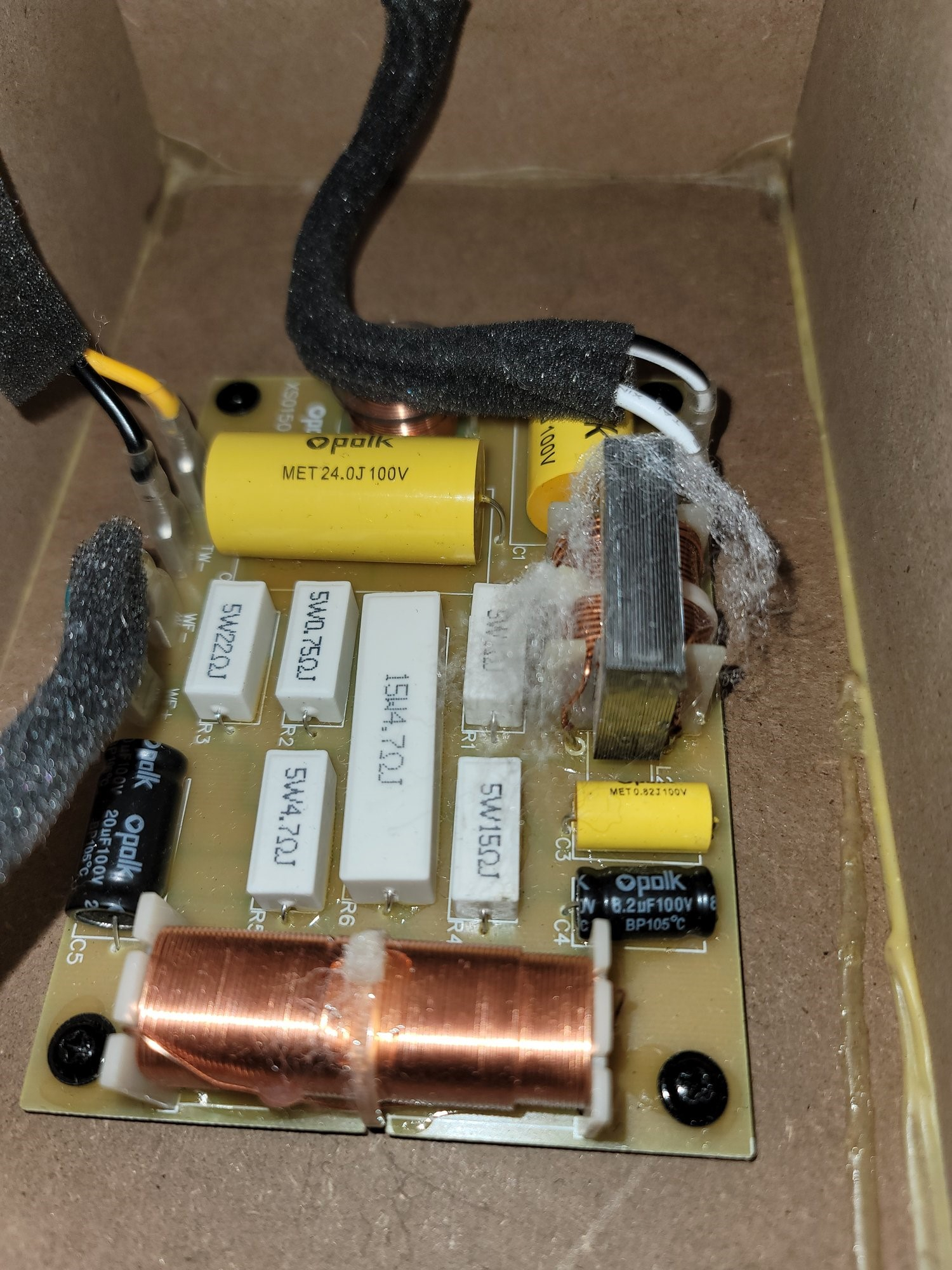 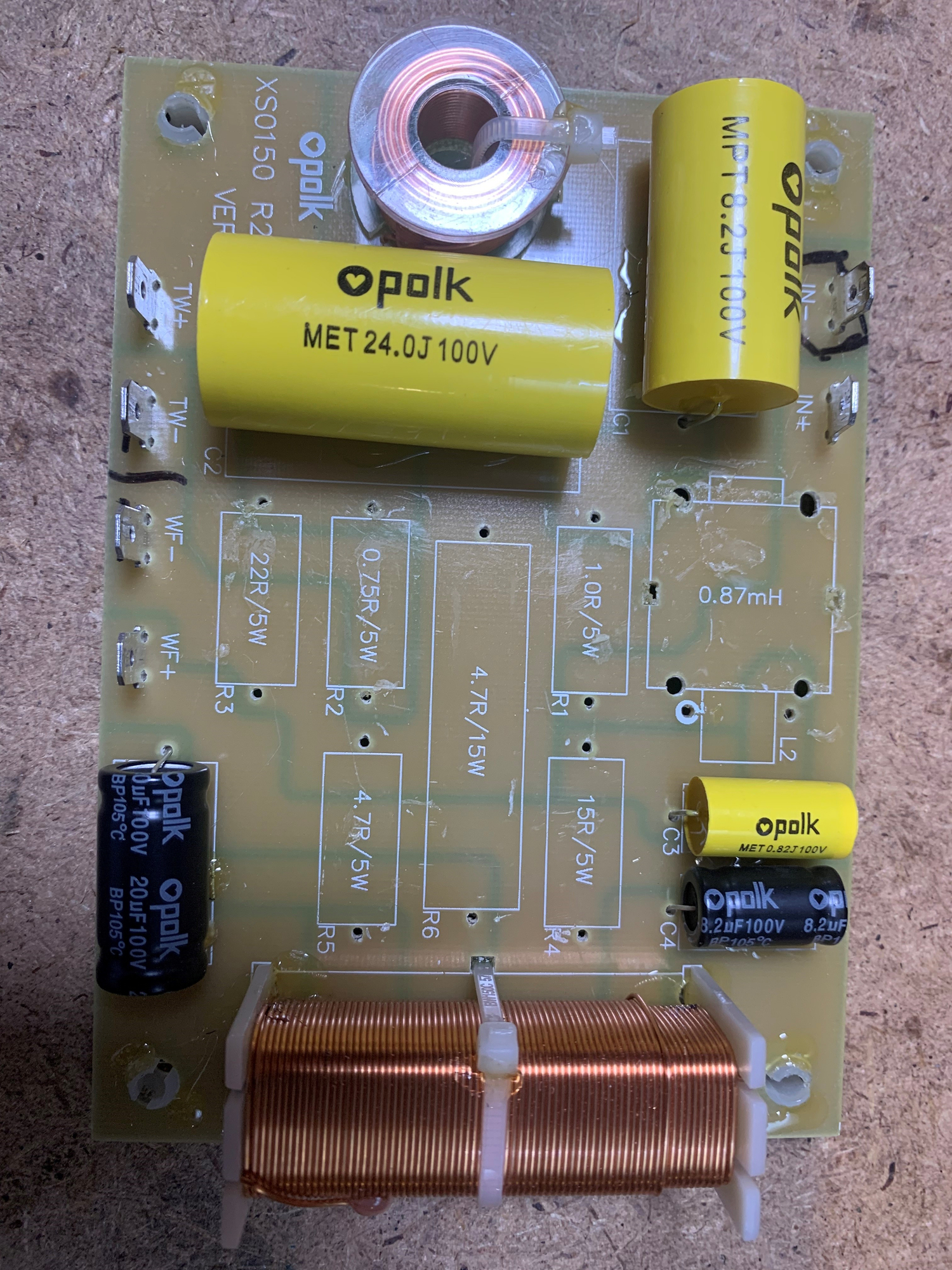 Bottom with the parallel caps. 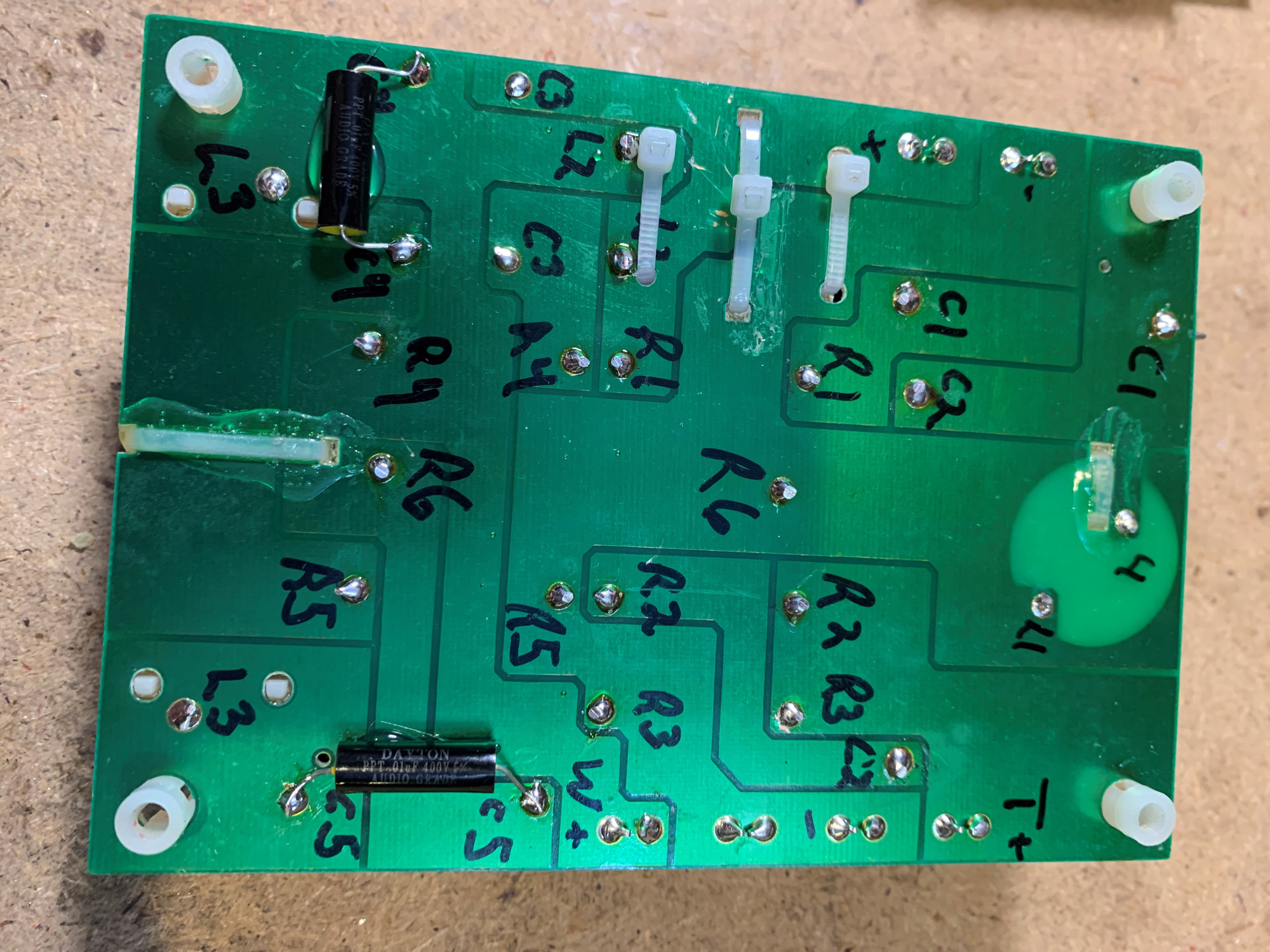 Completed boards but with the wrong resistor in place, 10 ohm instead of 1 ohm. 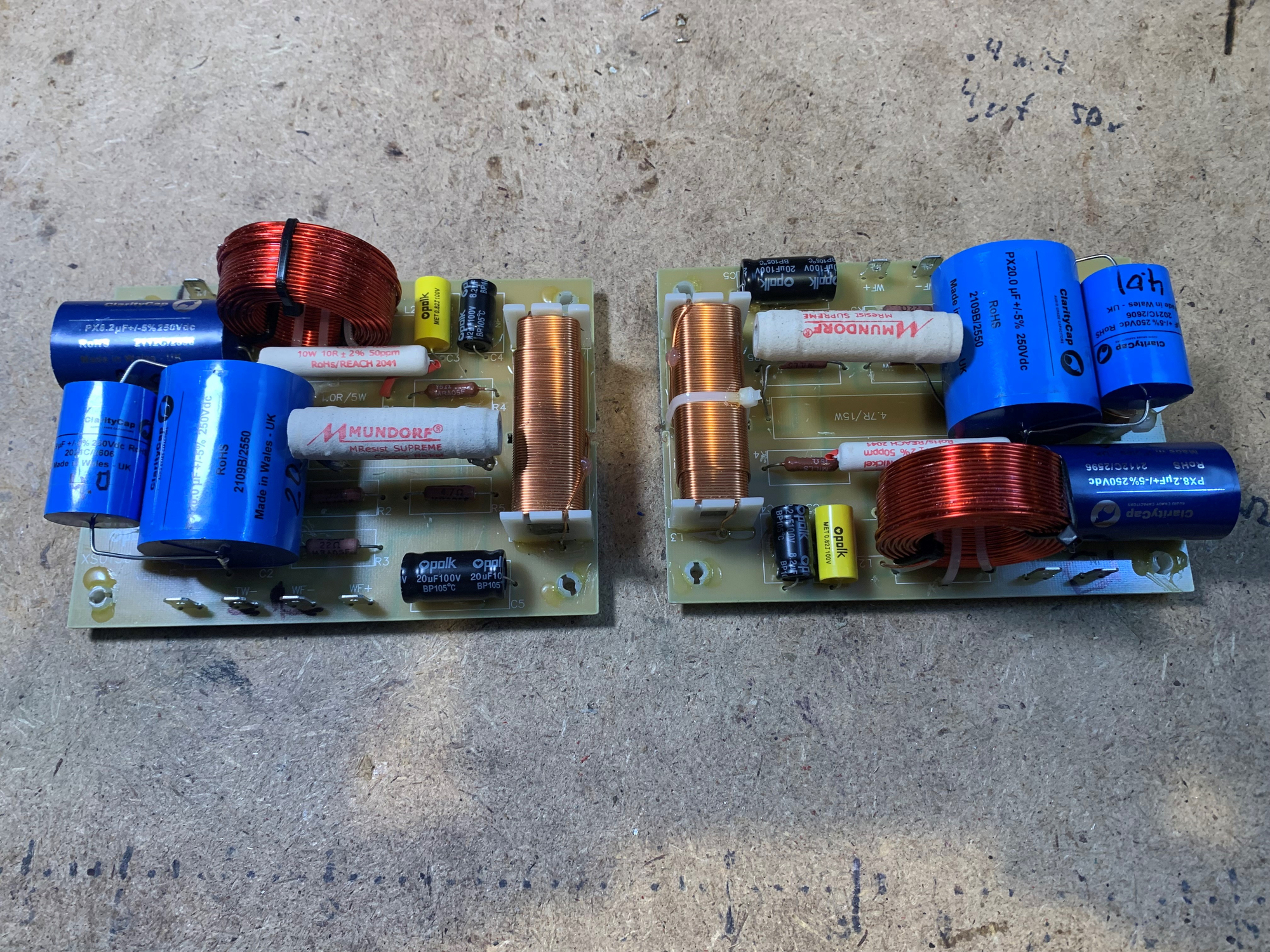 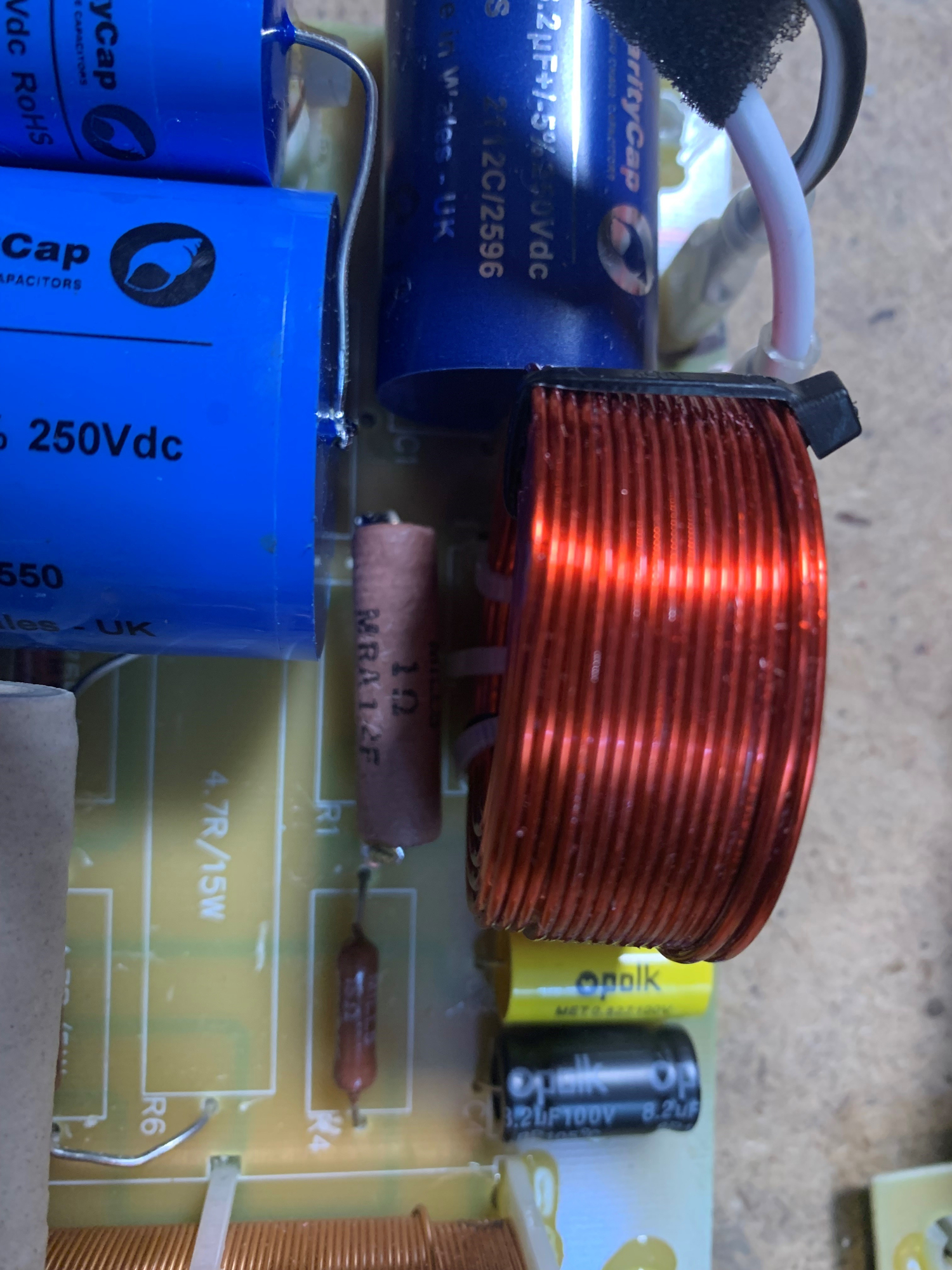 Very much worth it. Disassembly was not difficult if you leave the tweeters alone and have the right tool to remove the wires. I think the bass is controlled better and overall a much more pleasing presentation than what I remember them being out of the box.

EDIT:
If anyone does this (and if I disassemble again) - use the removed 8.2 yellow film cap in place of the 8.2 electrolytic if you can fit it in. It's a free part at that point.