If I were going to pay 3.5 million for Pokémon cards...

Tony M Posts: 10,373
January 14 edited January 14 in The Clubhouse
I'd have the money in a safe and secure holding account until it was proven to be REAL.

This video looks real but COME ON MAN... are you that rich you can risk 3.5 million ON CARDS? And not seeing them. One box of the eight I think, the DEAL should've been agreed apon to open it up to show proof of authenticity. Or even the inside box's appearance's shocked these guys instantly.

I just can't believe this happened. Logan Paul said his friend would cover the deal. The authenticator was supposedly duped too. Where's the scum bag that got the money???? He'd better be in a some far away jungle hiding for the rest of his life if this really went down.

It's great for internet hits though, that's for sure.
This was very well videotaped so I'm leery of it all.

I know a man who lost 2.5 million a year ago. That was real. Real bad.

I wanted to become a tracker to find said thieves but never contacted him.

It looks real but COME ON MAN...are you that rich you can risk 3.5 million ON CARDS? 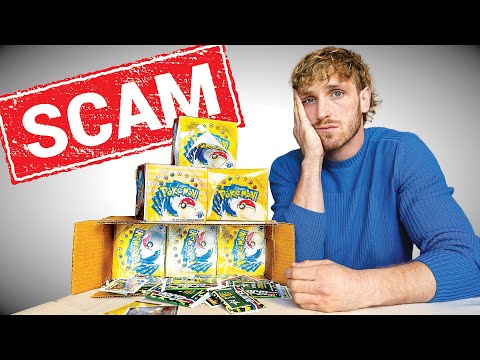 Most people just listen to music and watch movies. I EXPERIENCE them.
0 · Share on TwitterShare on Facebook